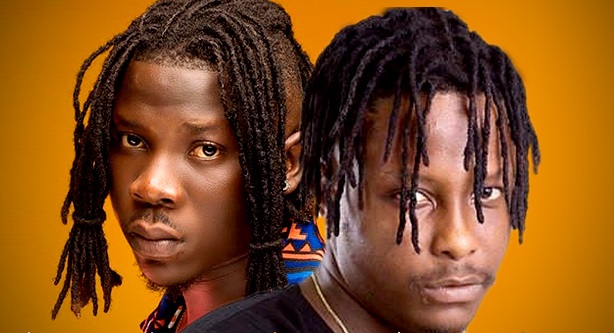 Ghanaian musician, Kelvynboy was introduced into the music scene as a “dreadlocs” guy.

However, after a few years in the industry, the “Downflat” hitmaker has gone back to his “original” self by cutting off all the locs and now spotting a very low cut.

In an interview on Hitz FM, Kelvyn Boy has revealed that he grew the dreadlocks because he wanted to look like his mentor, Stonebwoy.

According to Kelvynboy, his love and admiration for the BHIM boss made him want to look and sound like him.

“Maybe, yes, but I feel God’s time is the best. It was the influence, I was with Stone…I really look up to him, still…honestly, obviously, wanted to sound and look like him and move like him. So it was still in me even when I left his camp and now that I have become who I am or who I was, it’s still in me and I can’t deny that fact. I’m not saying that since I cut it all off, my love and admiration for Stonebwoy has left, its just a feeling of where I got it from. I believe I was just entering into another phase,” he told Andy Dosty.

Watch snippet of interview below;

I wanted to sound and look like @stonebwoy – that’s why I grew my locks. – Kelvyn Boy. #DaybreakHitz pic.twitter.com/Or60bjre2O

Kelvynboy was signed unto the Burniton Music Group owned by Stonebwoy. The two shared a beautiful father-and-son type relationship.

However, due to some controversies, Kelvynboy was asked to leave the label in the year 2019 after his contract of one year ended.

END_OF_DOCUMENT_TOKEN_TO_BE_REPLACED

Ghanaian comic actor, Benson Oduro Boateng, popularly known as Funny Face is steadily making a comeback to standup comedy after being away for a whole ten years. END_OF_DOCUMENT_TOKEN_TO_BE_REPLACED

The Game, Jay Bahd and Joe Young got one on the way! END_OF_DOCUMENT_TOKEN_TO_BE_REPLACED

Ghanaian-American actor and comedian, Michael Blackson has recently taken to Twitter and Instagram to make complaints about the cost of clearing goods in Ghana. END_OF_DOCUMENT_TOKEN_TO_BE_REPLACED