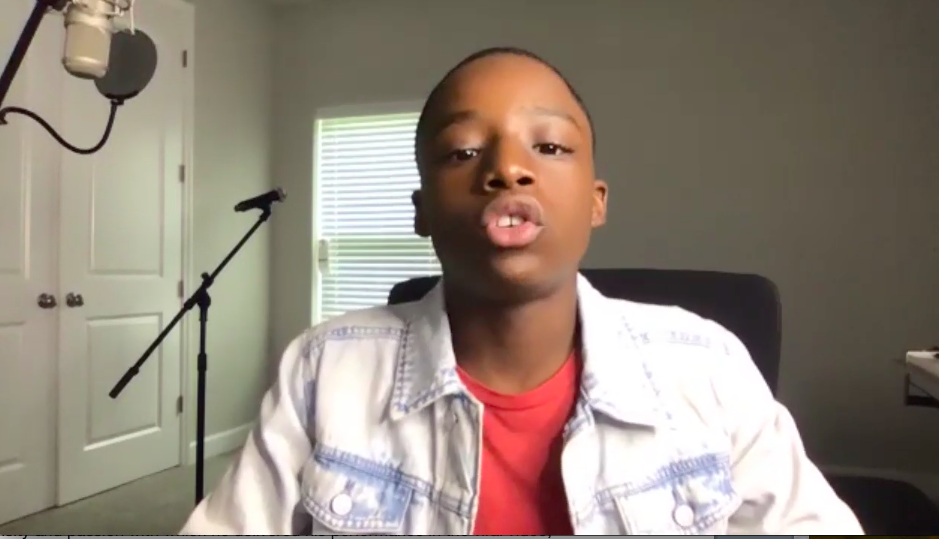 At age12, Keedron Bryant caught the attention of the world, when he gave the perfect soundtrack to the Black Lives Matter cause, following the killing of George Floyd.  Now 13, the young singer is preparing to inspire the world even more with an upcoming EP and a future album!

When America erupted in rage over the killing of yet another unarmed Black person by police, Keedron Bryant posted a video of himself singing an original song called “I Just Wanna Live” on Instagram. Written by his mother, Johnnetta Bryant, the song quickly became a rallying cry, with the video garnering more than 3 million views.

Keedron’s performance drew praises from the likes Oprah Winfrey and LeBron James, among others. He tells me in a virtual interview that former President Barack Obama’s acknowledgment of his song was a special highlight for him.

So how did it all start? “Right before I recorded ‘I Just Wanna Live’, me, my mom and my sister watched the video of Mr. George Floyd and that was really heartbreaking and very sad. Right after that, my mum gave the lyrics to the song and I meditated and prayed over the lyrics. I then went downstairs and I recorded it, ” Keedron explains.

Describing the intensity and passion with which he delivered his performance in the viral video, Keedron seems to have picked up on a lot of the injustices that his people go through.  “It is probably because of all the racial profiling and violence towards black people. The lyrics are really powerful and it really speaks to you and touches you in a special way.”

He adds, “It made me feel sad that I had to sing those lyrics but I am thankful that I am the one that had the opportunity to get the message out there; that black people can live on earth and enjoy life without fear in our minds”.

Keedron also highlighted the support he has been getting from the community. “I still get recognized even with my mask on. They tell me they love my song and give me a lot of encouragement”

Shortly after going viral, Keedron was approached by Warner Records, who offered him a record deal. With his parents’ support, he accepted and released a studio version of his ballad soon after. Today, the music video for “I Just Wanna Live” is out. The Sara Lacombe-directed clip is the teenager’s major label music video debut for Warner Records.

The stirring video opens on an American flag, which is dripping blood, as a chorus of children recites the Pledge of Allegiance. Bryant kneels before an angry white police officer who has a gun pointed at him.

The clip’s imagery depicts police brutality and the injustice of numerous killings of Black people, from a black hoodie with Skittles and a can of iced tea in the pockets in reference to Trayvon Martin to the names of many others who have recently been killed — Breonna Taylor, Floyd and Michael Brown among them — written on a Black body. At another point, Bryant sings as protestors clash with police. The final shot ends on a hopeful note, as Bryant’s compelling words appear to deescalate the officer’s violent approach.

The video is an indication of Keedron intent to stay inspiring and fans should expect more from his upcoming EP. “I finished my EP so that would be coming out soon. I am heading out to LA to record an album as well.  The EP has mainly inspirational and motivational songs, on the side of ‘Black Lives Matter’, but mostly to encourage people to just keep going and have faith and hope”.

According to Keedron, he is still a regular kid who does regular kid stuff. People should expect more of his love for the church and inspirational music.