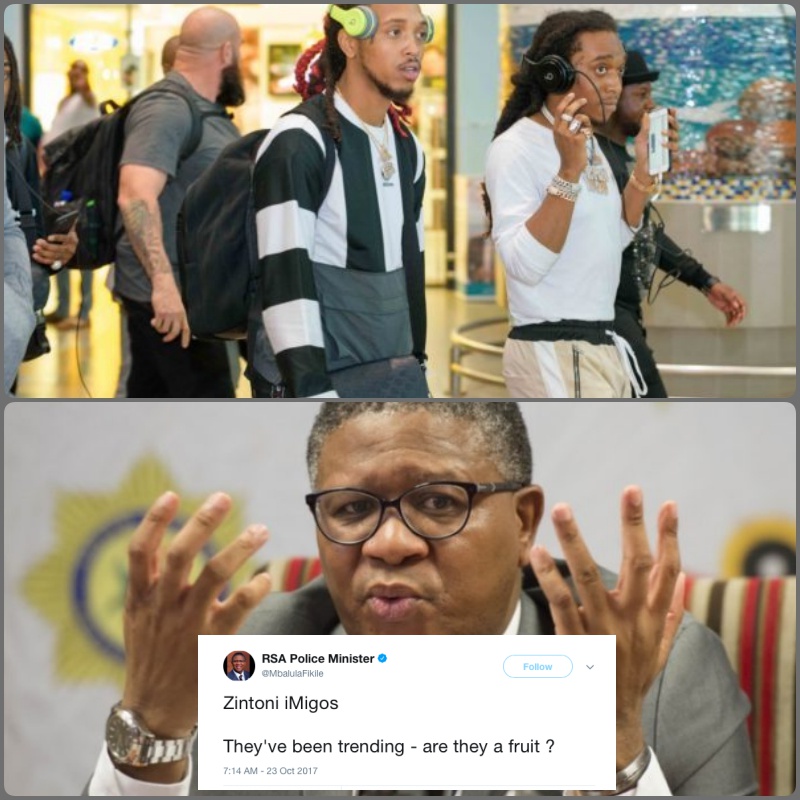 American hip hop trio of Quavo, Offset, and Takeoff, were in South Africa for their much anticipated concert last weekend and they generated so much buzz that the country’s Minister of Police had to find out about them! Police Minister Fikile Mbalula, asked if Migos were a fruit on his official Twitter account. He wrote: “Zintoni iMigos They’ve been trending – are they a fruit ?”

The Versace-singing Migos was in Durabn and what a party it was. The fans chanted the names of the trio, at a packed Durban ICC on Friday night as they started to become anxious after star-studded performances from local acts.
The Distruction Boyz, Gigi Lamayne, L’vovo, AKA and Nasty C were among the local  performers, while Nomalanga Shozi and Siyabonga “Heazy” Madida of Gagasi FM and TV personality Mbali Nkosi were MCs.
At the ICC, hip-hop “cool kids” rapped and danced to the tunes of Migos in their hip-hop-inspired tight jeans, bling accessories,  brightly coloured tops and sneakers.

However not everyone was impressed by trap acts. South African Twitter put out their two cents on issues from late start of the show to the MCs, what people wore and the value for money. No wonder the Police Minister caught the buzz!!!

Celeb Buzz: A review of Becca at 10 Concert

Chris Fonye popularly known as “Hydraulix Fonye” is a Ghanaian producer, sound engineer, songwriter and singer with a vast experience in the Ghanaian entertainment industry. END_OF_DOCUMENT_TOKEN_TO_BE_REPLACED

Although there may be hundreds of afro-beats artists in the country, Highly Spiritual Music signee, Lasmid believes he is unique. END_OF_DOCUMENT_TOKEN_TO_BE_REPLACED

Highly Spiritual Music signee, Lasmid, has stated that he wasn’t expecting his song “Friday night” to reach such great heights within a short time frame. END_OF_DOCUMENT_TOKEN_TO_BE_REPLACED

The 2023 African Cup of Nations, AFCON initially scheduled for Côte d’Ivoire next June will now be held in January and February 2024 due to the concerns over the rainy season in the country. END_OF_DOCUMENT_TOKEN_TO_BE_REPLACED