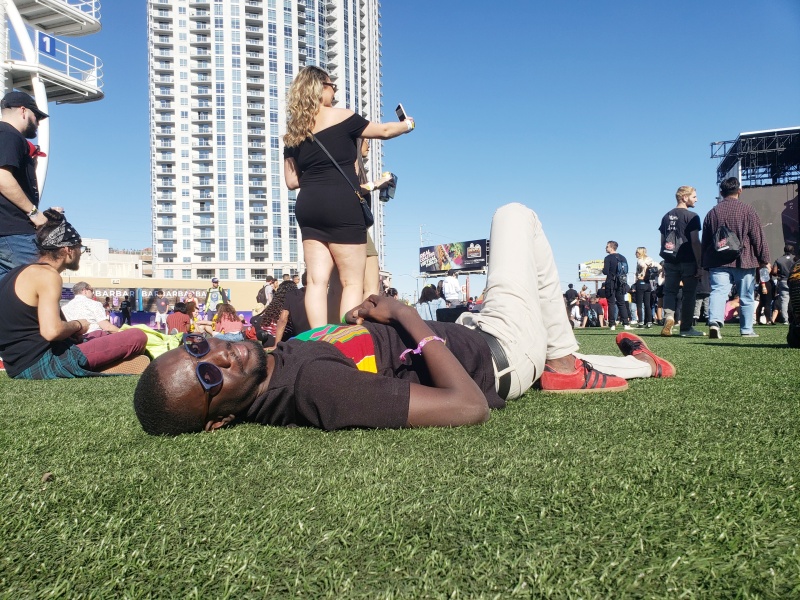 The Day N Vegas (pronounced Day In Vegas) musical festival could best be described as a showcase of the new generation of hip-hop. And though I felt lost because I didn’t know many of the acts on the lineup, I didn’t get lost in the music, sun and fun that hit Las Vegas from November 1- 3!

The mornings and evenings in Vegas were pretty cold and chilly that weekend, but the festival brought the heat with a lineup boasting of chart-toppers, to underground performers, to some newcomers, at the Las Vegas Festival Grounds.

The original headliners were J-Cole for Friday, Travis Scott for Saturday and Kendrick Lamar for Sunday. Travis was replaced with Future and Metro Boomin, after a knee injury. The lineup for the festival was stacked with heavy hitters drawing out thousands of people for a sold-out event!

The set up for Day N Vegas was more like a block party. There were three stages, “Jackpot” (main stage), “Roll The Dice” and “Hunnid” (the smallest stage) and from noon to midnight, these stages came alive with music, energy, fun and some fire!  Although the ‘Hunnid’ stage didn’t host any of the super big names, it actually had some of the best performers throughout the festival!

Day N Vegas however, wasn’t all about the music; there was also a spread of carnival-style, food, drink, and merchandise vendors.  Although I didn’t find a lot of spicy food, I made do with the variety available, which allowed me to try something new on each day of the festival.

Here are my highlights from the 3-day festival

Las Vegas gets its own hip-hop music festival! #DayNVegas2019

The chart-topping artist announced his 2020 campaign, “The Fall Off” during night one of the festival. Although it was a mock campaign, promoting his new album, the love he got from the hip-hop fraternity on the night made it seem he good truly take over from Trump! There were supporters who came out in their campaign gear and paraphernalia.

The heavyweight lyricist, set the tone for the rest of the weekend, performing his own hits and showing love to the whole Dreamville Records family as well as surprising the crowd by bringing out Da Baby to perform his hit song, “Suge.”

Cole was the only headliner I saw during the festival. Saturday’s lineup got chaotic with the rampant changes in times and stages, and so I couldn’t see Future and most of the other acts on the bill. I left after seeing Migos and missed out on A Boogie with da Hoodie, Lil Nas X etc.

And on Sunday, I had a flight to catch back to New Jersey. So I left without seeing Kendrick Lamar and Tyler The Creator.

As I stated from the beginning, there were many artists on the bill that I didn’t know (most of them were underground performers, but yes there were some big names that I only discovered at Day N Vegas!).

Harry Mack was one of the first performers to kick off the Day N Vegas festival on Day 1.  He didn’t look anything like a ‘stereotypical rapper’ (and he is white) so I didn’t give him much of a chance. But the guy can freestyle like nobody’s business, incorporating the audience into his set. In fact, he even rapped about me using a stabilizer to video him from the crowd!

Believe it or not, I had never heard of Megan Thee Stallion. And well, she was nothing shot of what the current image of a top female emcees is; raunchy and raw! She took on the “Roll The Dice” stage on Sunday night, attracting a huge crowd. In fact I left the ‘Jackpot’ stage because my friends from Ghana wanted to go and see her set.

I soon realized that although I knew and loved the hit song “Hot Girl Summer”, it didn’t belong to Nicki Minaj as I thought. Megan wore a hot outfit, entertaining the crowd.  She handpicked some fans from the crowd to join her up on stage, and well…show the crowd, why they were hot girls and hot boys. They played a game called Simon Says and there was a lot of twerking!!!!

My ultimate surprise was discovering R&B artist, Choker. His eclectic style and coded lyricism likens him to Frank Ocean. The song ‘Lucky’ immediately became a favourite and the line ‘…try my love don’t try my trust’ echoed in my head after hearing it!

Day N Vegas was not all hip-hop, it was a good reflection on how the genre lends itself to smooth fusions and collaborations with other genres.  Miguel brought in some R&B vibes on Friday night.

On Sunday, Singer Zacari and his four-piece band (The Throwaways) delivered velvety vocals for numbers like “Midas Touch,” “Don’t Trip” and the Black Panther soundtrack entry “Redemption.”  He also wowed the crowd with a cover of Bill Withers’ “Ain’t No Sunshine” and wrapped up his beautifully moody set with “Ten Outta Ten,” and the Kendrick Lamar-collaboration, “LOVE.”. His set was probably the most packed I had seen at the ‘Hunnid’ stage, and it was also the farthest I ever was from a stage!

If you thought hip-hop only mixed well with R&B you would be wrong! I also discovered the very difficult to describe music of Hippie Sabotage, comprising brothers Kevin and Jeff Saurer. Their music is a mix of Indie music, Instrumental music and electric music.

Who would have thought a few years ago that there would be a hip-hop festival in Las Vegas, and feature artists from Africa? Yes, we weren’t left out of the Day N Vegas history!

On Day 1, Goldlinks who mentioned on stage that he is of a Cuban and Nigerian heritage during his set brought on stage Nigerian singer Rema (who was originally scheduled to close the ‘Roll The Dice’ stage that night). Rema performed his hit song, ‘Dumebi’ to my delight, as well as the crowd.

On Sunday, Nigerian-born rapper-singer also mounted the ‘Roll The Dice’.

Most new festivals have their victories and hiccups.  The lineup for Day N Vegas was absolutely insane and perhaps the organizers were overwhelmed despite their experience with putting together concerts and festivals including Coachella!

I felt lost whenever performers were late, or stages had a set or time change. That was why I left early on Saturday and missed the headliner. Walking from stage to stage at these festivals can take a tow on you… my body was tired and the chaos was more stress on me, so I had to go and rest.

The recurring sound issues felt more rampant on Day 3.  Boogie unfortunately had to cut his set 15 minutes short due to his equipment overheating. Reason also experienced several hiccups during his set.

Parking was also an issue. There was no on-site parking, many surrounding casinos closed their doors to festivalgoers and rideshare seemed to be a sole option, although we had to walk for quite a distance before we could find them.  The only option close to the festival grounds was Taxi, and I found out on Sunday, on my way to the airport, that it wasn’t a bad option at all.

The taxi driver was friendly and gave me a few tourist tips as we passed the Strip. He liked playing blackjack and gave me some tips about which casinos offer the lowest limits and best rules. I was more interested in the history of the place.

Overall, the show made waves for the Las Vegas music scene and I am happy I was part of something new and that grand!