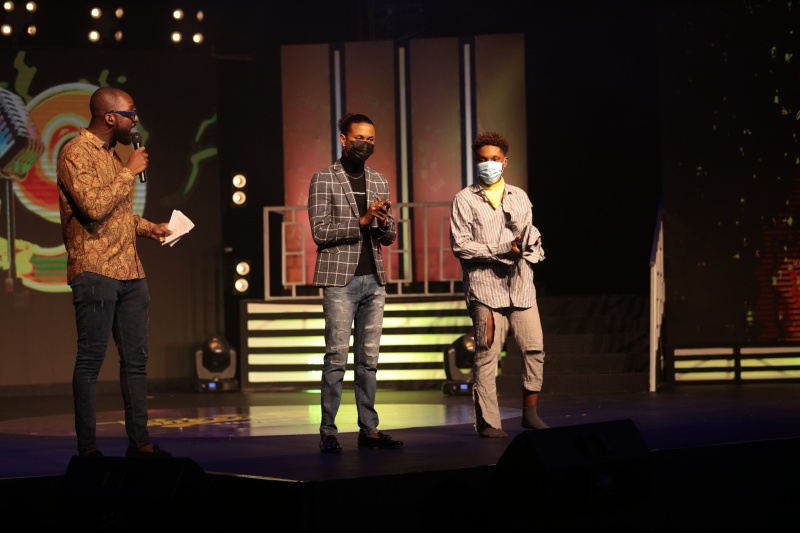 It was a heart pounding moment at The Grande Arena auditorium on Tuesday 20th October when the host, Rev Erskine called all 12 contestants on stage to announce the first eviction of the season.

Prior to that moment, the 12 contestants in their debut live performances had entertained audience and viewers to hit cover songs across the globe; Based on that performance, two of the contestants were set to say goodbye to Ghana’s most relevant and most rewarding music TV reality show, MTN Hitmaker in its 9th season.

Per the format of the show, the three top contestants automatically advance to the next stage; leaving nine at the mercy of votes and the Judges’ decision.  Three singers Achiaa, Adepa and Gabbynova picked top spots with the latter picking the first ‘Brightest Moment’ Award as he won the heart of the judges and voters with his rendition of Lukas Graham’s ‘7 years’. He took home a start phone from MTN as did Bright Owusu Bobbie, the most interactive fan.

The pulsating moment came when the host revealed the bottom 3 who were automatically up for eviction; singers, Kobi Tuesday, Pashyn and Jimi. After deliberations, the judges unanimously decided to save Pashyn, earning her the 10th slot progressing to the next stage of the competition.

In an unexpected twist however, the host announced that the two who had been unsuccessful at reaching the next stage had been given yet another chance to compete for mouthwatering 120,000 Ghana Cedi Record deal. ‘The judges had decided to give save the two! This set the tone for the performances for the night.

CONTESTANTS PERFORM THEIR OWN SONGS

One after the other, the finalists sang and rapped to their own compositions produced by Beatmakers’ Mix Master Garzy, M.O.G Beats and DJ Breezy. The judges were generally impressed with the contestants’ song delivery, stage craft and appearance.

Will the contestants get another night of free eviction or will next week be the end of the road for a contestant or two?. You can also catch all the action every Saturday on TV3 at 6pm and GHOne TV at 9:30pm and Sundays on Sundays on 4syte TV at 2:30pm repeat on Tuesday, 4pm and UTV at 3pm.

MTN Hitmaker is an MTN Ghana initiative and produced by Charterhouse Productions.

Related Topics:MTN Hitmaker
Up Next