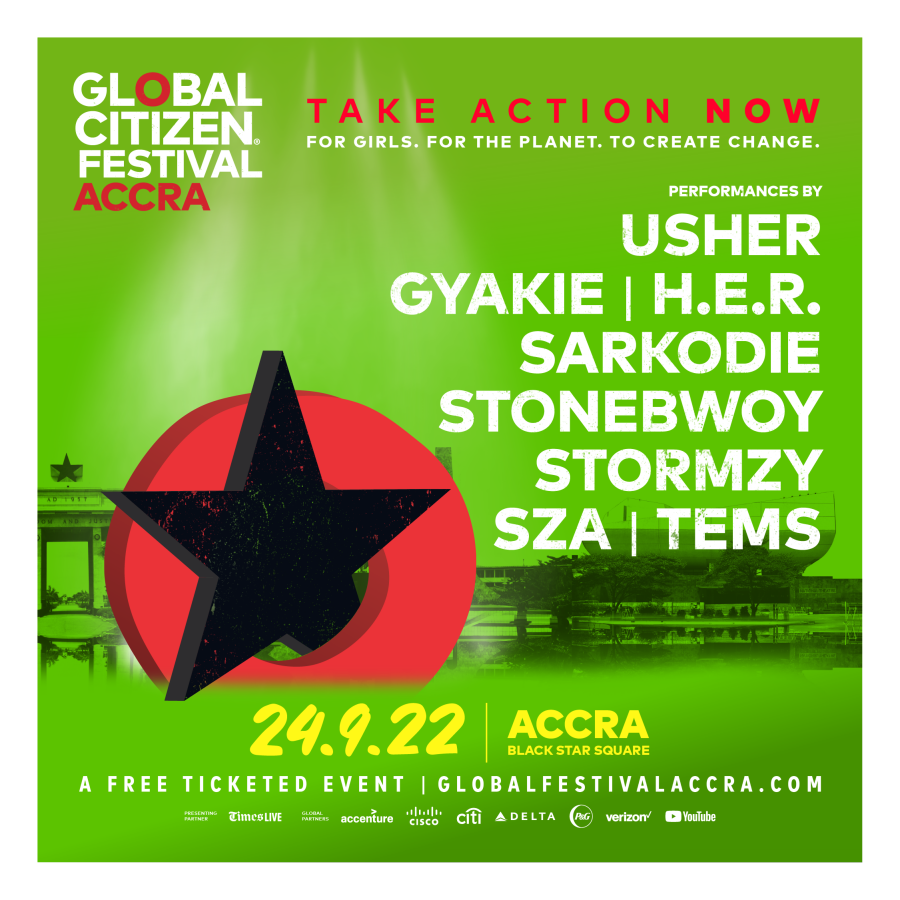 Since it began lighting up Central Park’s Great Lawn in 2012, the Global Citizen Festival has become

Globally, the disproportionate impact of the Covid-19 pandemic has pushed nearly 100 million more people into extreme poverty and is reversing recent trends of shrinking inequality, leading to the loss of at least three years of progress. Without urgent action NOW this backsliding will only worsen. Russia’s invasion of Ukraine has aggravated the situation further, with as many as 323 million people now facing acute hunger, and 1.2 billion people now live in nations experiencing a perfect storm of food, energy, and financial crises. If we don’t take action NOW, as many as 200 million more people may be plunged into extreme poverty by November.

The 2022 Global Citizen Festival will call on world leaders at the United Nations General Assembly and ahead of the G20 and COP27 in November to step up and invest $600 million into the future of women and girls, close the annual $10 billion climate financing shortfall, deliver $500 million to help African farmers respond to the global food crisis, and provide urgent relief from crushing debts to End Extreme Poverty NOW.

Marking the 65th anniversary of Ghana’s independence and the 20th anniversary of the African Union, Accra’s iconic Black Star Square will see live performances from Usher, SZA, Stormzy, Gyakie, H.E.R., Sarkodie, Stonebwoy and TEMS with more to be announced.

“Decades of systemic and political failures have led humanity into the midst of converging and rapidly deteriorating crises – climate, hunger, health, war and conflict. The most marginalized populations are paying the price of the stagnant inaction of our leaders, and now millions of lives, and the future of our planet, are at stake. We refuse to just stand by and watch! We refuse to accept the starvation of multitudes when solutions are readily at hand. We demand a secure future for girls everywhere. We demand governments keep their promises on climate funding. We demand relief from debts unjustly crushing economies. And we demand action NOW, while there’s still time to change our collective trajectory.” – Hugh Evans, Co-Founder and CEO, Global Citizen

Global Citizen is calling for world leaders, major corporations and philanthropic foundations to take to the Global Citizen Festival stages and announce new commitments to End Extreme Poverty NOW, including:

Deploy Financing NOW and immediately meet the total goal of reallocating $100 billion in IMF Special Drawing Rights (SDRs), by making up the $40B shortfall.

SDRs are a type of reserve asset mostly sitting unused by the world’s wealthiest countries. These rights can immediately provide new and affordable financing relief for countries at high risk of financial and debt distress.

There are 69 eligible low-income countries who stand to benefit from the reallocation of SDRs, many of which are in Africa. During the pandemic, many of these governments spent more on debt repayments than on education, health and social protection benefits combined. This funding is needed NOW to ensure governments have what they need to invest in strengthening health systems and pandemic preparedness, and the nutrition, welfare, and education of their citizens. Denmark, Norway, Ireland, Belgium, Sweden, Luxembourg, Austria, Portugal, Korea, and Sweden can transfer their Special Drawing Rights to the developing countries that desperately need them right now.

Take Climate Action NOW and fulfill the $100 billion per year promises made in the Paris Agreement.

Africa accounts for just 3-4 percent of global emissions, yet finds itself on the frontlines of the effects of climate change. Extreme temperatures and droughts, such as those in Somalia, threaten to make a mockery of our attempts to end extreme poverty and protect the planet. African countries and businesses stand ready to invest in green jobs and infrastructure, but they need genuine partnership to deliver.

Having not contributed to the problem, it is unjust to expect that Africa shifts to renewable and clean energy without support from the wealthiest countries, who have indeed industrialized using fossil fuels over the past 150 years. Rich countries like Germany, Italy, the US, Canada and Australia must fulfill the promise that was meant to be delivered by 2020 and close the annual $10 billion shortfall.

In the last two years, more than 47 million women and girls have been pushed back into extreme poverty, and the pandemic has forced millions of girls out of the classroom and into unpaid care work.

The US, UK, the European Commission, France, Germany and Italy can change this by pledging $600 million in financial support towards UNFPA, Education Cannot Wait and the Child Care Incentive Fund, launched this year by the White House. This will support new policies addressing the expansion of paid parental leave, including obligatory paternity leave, access to contraception and education.

Mitigate a Global Food System Meltdown NOW by providing $500 million for Africa’s farmers to make the most of the current planting season and fund the local production of fertilizers, tools, and equipment they need to produce more food.

Africa is currently experiencing horrific food shortages as a result of Russia’s unjust invasion of Ukraine. Yet the continent has enough arable land to feed the world, let alone its own citizens.

Germany, the UK, the European Commission, Denmark, Norway, Sweden and Belgium need to band together and provide funding to agencies like the International Fund for Agricultural Development (IFAD), the Global Agriculture and Food Security Program and CGIAR to urgently equip farmers with the resources they need. Failure to do so NOW will make the present hunger crisis far worse over the coming year, as food supplies diminish and prices soar even higher.

Throughout the campaign, Global Citizen will continue to defend and promote advocacy, ensuring marginalized voices are heard and leaders are held accountable to deliver on their promises. Global Citizen will elevate citizens’ voices, especially from the Global South; defend the right of anyone to speak freely, dissent, and organize without fear of reprisals or violence; and call on corporations to refrain from using litigation to silence activists on the frontline. Without such efforts to champion the causes of those in peril, the achievement of our campaign goals will continue to be deprioritized by those in power.

“Ghana is honoured to host this year’s edition of the Global Citizens Festival. I look forward to welcoming each and everyone of you to Accra, capital of the country at the centre of the world. Together, let us join hands and help accelerate progress towards the realization of the SDGs. We owe to the next generation to live in a world free from poverty, disease and the degradation of the environment. The time to help make a change is now. We must align forces to make an impact in Africa, and help end extreme poverty. I have called colleague African leaders to join me in September, and help break these systemic barriers that have been affecting our people. Let us build a strong foundation for future generations.” – H.E. Nana Akufo-Addo, President of Ghana

“While communities face injustices, crises and inequalities in the world, we simply cannot give up the fight and solidarity to end poverty. We need all voices in calling for a better future for everyone, everywhere. Now is the time for ambitious action. Together, with Global Citizen, we can keep the promise of the Sustainable Development Goals.” — Amina Mohammed, United Nations Deputy Secretary General

“This year we have strongly felt the impacts of climate change across international conflicts, global health, and economic crisis, raising the level of inequality higher than before. However, together our mission is possible. It is more important than ever that the world comes together to demand action from global leaders with a unified voice, NOW. Global Citizens must champion political and financial solutions, like climate and agricultural adaptation, that center the most vulnerable members of our global community and plant the seeds for dignified and prosperous futures.” – Ban Ki-moon, 8th Secretary-General of the United Nations & Ban Ki-moon Center for Global Citizens Co-chair

“All over the world we are seeing the ravaging effects of the climate crisis, and the disastrous results of political inaction – of not hearing or empowering the victims of poverty and disenfranchisement, of not allowing countries to work in collaboration to protect the global public good. NOW is the time for ordinary people to take action and fight, and for world leaders to listen and act, because their lives and livelihoods are at stake.” — Mia Mottley, Prime Minister of Barbados

“An urgent, collective, and concerted effort is required to make progress toward ending extreme poverty. I am encouraged by the call to action issued by Global Citizen and I call upon leaders from around the world to add their voices, as we cannot afford to sit back and watch the status quo continue. It is time to break down the systemic barriers that have kept people in poverty and indeed, time to act to protect future generations from climate change.” — Hakainde Hichilema, President of Zambia

“We live in perilously difficult times and it is our duty to fight hunger, poverty, discrimination, illness and effects of climate change. We need to pull together all our resources to ensure that the most vulnerable citizens can live in dignity and safety. I thus fully support the tireless efforts by Global Citizen to continue uniting us in this vital joint action.” – Andrej Plenković, Prime Minister of Croatia

​​“The COVID-19 pandemic has shown that all countries must have equitable access to the tools and technologies needed to prepare for, prevent, detect and respond rapidly to outbreaks and other health emergencies. This is why the World Health Organization brought public and private partners together to launch the innovative mRNA Technology Transfer Hub based in South Africa, with more than a dozen low- and middle-income countries joining so far. I welcome Global Citizen’s support for this crucial initiative to diversify and expand manufacturing of life-saving vaccines, so that the world is better prepared to prevent and respond more equitably to infectious diseases and the next pandemic threat.” – Dr. Tedros Adhanom Ghebreyesus, Director-General, World Health Organization

Related Topics:Global Citizen
Up Next

Broadcaster, Serwaa Amihere has advised women not to put too much stress on their men as they may be going through a lot. END_OF_DOCUMENT_TOKEN_TO_BE_REPLACED

Dr. Edem Mahu from the University of Ghana, has received the “Africa Award for Research Excellence in Ocean Sciences” from AGU. END_OF_DOCUMENT_TOKEN_TO_BE_REPLACED

A brand-new Alisa Hotel location in Tema was unveiled on Friday, September 30, 2022 in pomp.  END_OF_DOCUMENT_TOKEN_TO_BE_REPLACED

With effect from October 1, 2022, Brussels Airlines will be one of many European airlines utilizing Aviance Ghana Limited’s services for all of its passenger and ground handling activities. END_OF_DOCUMENT_TOKEN_TO_BE_REPLACED

Music producer and artist Nektunez has a new family. END_OF_DOCUMENT_TOKEN_TO_BE_REPLACED