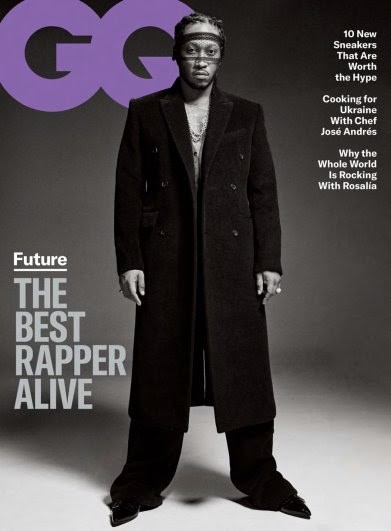 “Artistically, his impact can’t be denied. Especially not after eight solo albums, 19 solo mixtapes, one collaborative album, four collaborative mixtapes, two EPs, and one soundtrack (for 2018’s Superfly). Worldwide, he’s been streamed over 30 billion times and has, in the process, inspired an entire generation of rappers. Few artists are as prolific.

When you survey the hip-hop landscape, no other artist has been as consistently excellent, or as influential, for as long as he has. He invented his own sound, which has since become the dominant style in rap. He has delivered hit after hit after hit. And he’s done it all on his own terms.

Rap would never sound, look, or feel the same after Future landed. If you want to know where the culture’s going next, just watch and listen to the iconic Atlanta rapper, singer, and producer. He went from cooking up beats in a basement for the Dungeon Family to generational superstardom with a presence looming from the streets all the way to The Met Gala. He literally brought trap into the White House as President Barack Obamarapped along to his quintuple-platinum banger “Jumpman” [with Drake]. He has collected dozens of multiplatinum certifications and reached rarified air as one of only a handful of rappers to achieve Diamond status for 2020’s “Life Is Good” [feat. Drake], affirming him as one of the best-selling acts of all-time. Not to mention, he carved out a place in the history books as “the first artist to release two Billboard Top 200 number ones in consecutive weeks.” Along the way, he adorned the covers of Billboard, Clash, GQ, Rolling Stone, The Source, XXL and more in addition to delivering show-stopping performances on Saturday Night Live and Ellen. In 2019, he garnered a GRAMMY® Award in the category of “Best Rap Performance” for “King’s Dead” alongside Jay Rock, Kendrick Lamar, and James Blake. Kanye West sought him out as Executive Producer on the headline-making Donda 2 in addition to appearing on two tracks. He also pulled up on Gunna’s “pushin P” with Young Thug, appearing on yet another chart-busting banger. Future looks ahead again, launching his forthcoming ninth album with the single “Worst Way.”

19-year-old Florida rapper Smokingskul has just shared his new single and video “Nina”. Smokingskul is at the helm of a new era of plugg music known as “dark plugg”which substitutes the ethereal sounds of “plugg” with more tonal melodies that are accentuated by distorted percussion, producing a grimey, DIY sound. END_OF_DOCUMENT_TOKEN_TO_BE_REPLACED

Drake officially has more slaps than The Beatles. END_OF_DOCUMENT_TOKEN_TO_BE_REPLACED

Swizz Beatz and Timbaland have filed a lawsuit against Triller, claiming the company still owes them $28 million for the sale of their Verzuz series. END_OF_DOCUMENT_TOKEN_TO_BE_REPLACED

Two well-known Italian ‘trappers’, a type of rap music, have been arrested for a suspected racially motivated attack on a Nigerian factory worker near Monza in Rome. END_OF_DOCUMENT_TOKEN_TO_BE_REPLACED