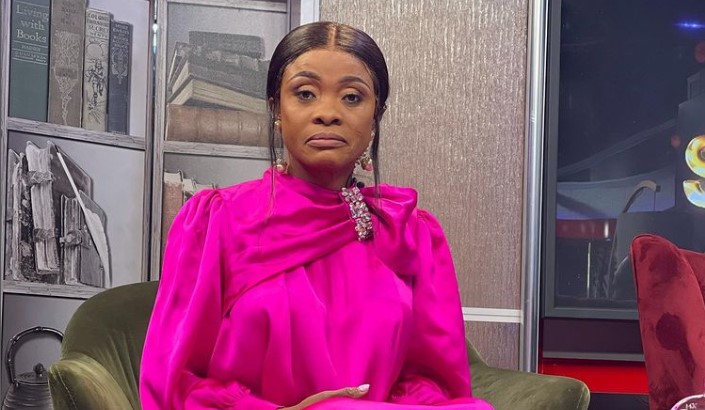 Evangelist Diana Asamoah says she was wrong when she condemned women who wore make-up and certain kinds of clothes.

The singer, who once described women who wore trousers and other clothes as “worldly,” has said she is now correcting the wrong perception she created about being a Christian she implanted in people.

She indicated in an interview on UTV, Saturday, that her current adoption of the things she used to condemn shows her growth in Christ.

According to her, the change in how she dresses indicates she has a better understanding of what it means to be Christian now. To her, the things she used to criticize are necessities of life.

“It is about growth in Christ Jesus. We condemned makeup and other things we thought of as worldly but now we have seen the light and realized that being Godly is more about your deeds and not about your looks. I’m correcting the wrong impressions and perceptions about being a Christian I planted into people with my current fashion sense.”

Several months ago, the gospel musician bemoaned the complaints from some people that suggested she had backtracked as a Christian because of the change in her dressing.

“I still don’t understand why some Ghanaians are saying I have diverted because of my latest style dressing because I’m still committed to the work of the Almighty God.

“When you are not matured in the work of God, you may think anything that people do is a sin because God has not opened your eyes to see what is good or bad.

“My new taste for good dresses has not stopped me from serving my maker and I’m still winning souls for God just that people don’t understand me because they are not matured in Christianity.”

watch speak in the interview below.

Praye Tietia, King Promise and others join The Kentos Band at their official media launch

Viola Davis makes a stunning transformation in the new trailer for ‘The Woman King’, in which she plays Nanisca, leader of the all-female warriors known as the Agojie. END_OF_DOCUMENT_TOKEN_TO_BE_REPLACED

African-American businessman and jet broker Kelvin Mensah, popularly known as PJKev has added his voice to the many people against the building of the National Cathedral. END_OF_DOCUMENT_TOKEN_TO_BE_REPLACED

Nigerian hip-hop artiste, Eedris Abdulkareem has disclosed that he is battling kidney failure and will have a surgical operation at the end of July. END_OF_DOCUMENT_TOKEN_TO_BE_REPLACED

According to reports from Nigeria, unidentified gunmen have attacked an ‘advance team’ of President Buhari’s presidential aides leading to injuries to two people. END_OF_DOCUMENT_TOKEN_TO_BE_REPLACED

Sensational highlife/afrobeat artist KiDi has said that his dream is to collaborate with Daddy Lumba on a song. END_OF_DOCUMENT_TOKEN_TO_BE_REPLACED