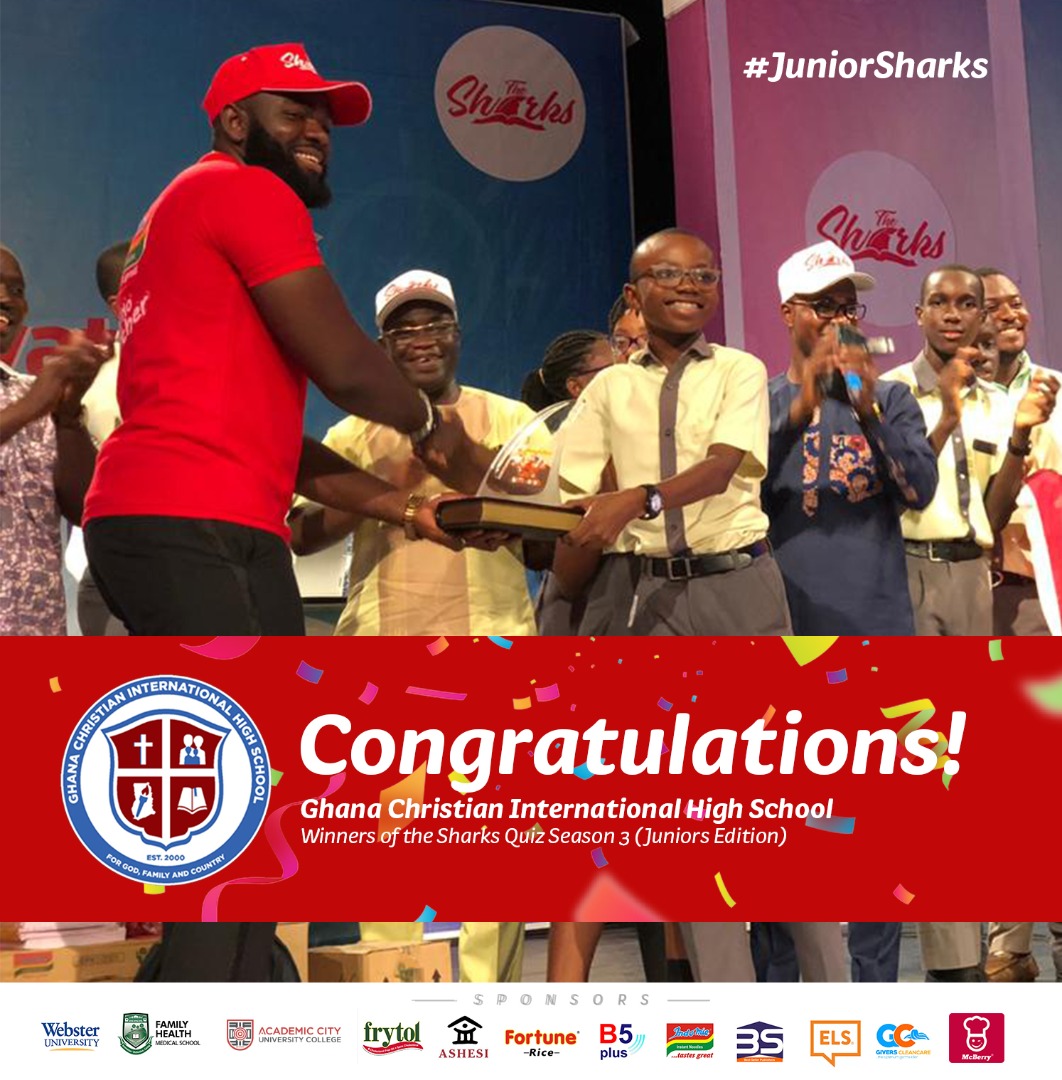 The Sharks Quiz started with 110 contestants from 22 schools, but now the competition had reached its climax. It was the season finale and interestingly, the two schools that had battled it out in last season’s championship match, Ghana Christian International High School and Delhi Public School, had qualified once again for the final. Last year’s final ended in pain and agony for Delhi Public School, as they were edged by a mere five points. This season, they hoped to get their revenge and Ghana Christian International High School were hoping to become back-to-back victors of the competition.

The first round is known as the Right Corner Round, it is based on General Knowledge in Ghana and Africa. Eight questions are posed to each school and a correct answer gives you ten points. There are no deductions in this round. In round one, Christian High gained for themselves a thirty point cushion, amassing 70 points whilst their opponents gained 40. However, the competition was far from over. There were three more rounds and DPS were strong in every department.

The second round is known as the R Cube round. The focus in this round is on reading, writing and arithmetic. Like is done in the first round, questions are posed to both schools. In this round there is a five point penalty for a wrong answer. Round 2 ended in a draw, with both schools amassing 20 points. Both schools had a reputation for working magic in the third round, also known as STEM Like No Other. Everyone was wondering which school would come out on top in
the third round.

The STEM Like No Other round focuses on science,as its name suggests. Like in round 2, a wrong answer attracts a five point penalty. However there is a twist, questions are not posed, instead the first school to buzz in is acknowledged. The STEM Like No Other round was an end to end battle, with both schools’ speed and accuracy being showcased. In the end however, Delhi Public School amassed 45 points whilst Ghana Christian International High School gained 20 points.

The competition was wide open and the fourth round would ultimately be the decider. If Christian High could hold on to their lead, they would succeed in defending the trophy. If DPS toppled them in the fourth round, however, they would have to surrender their crown.

The fourth round is the one-on-one round, in this round students face off in pairs based on their preferred subjects. Two questions are asked to the contestants in this round and the first person to hit their buzzer is acknowledged. A correct answer is worth ten points whilst a wrong one attracts a penalty of five points. After all the contestants had been asked their questions Ghana Christian International High School had 30 points and Delhi Public School had 25.

The final scores read 140 to Ghana Christian International High School and 130 to Delhi Public School. It was once again a close contest between the two and Christian High had just gotten the better of DPS once again.

Apart from the ultimate prize there were also individual awards to be won. Delhi Public School’s Shriman Jha won the Overall Best Student award and he also took home the Best In Science prize as well. Maxwell Ocloo of Manna International School won the Best In Mathematics award.