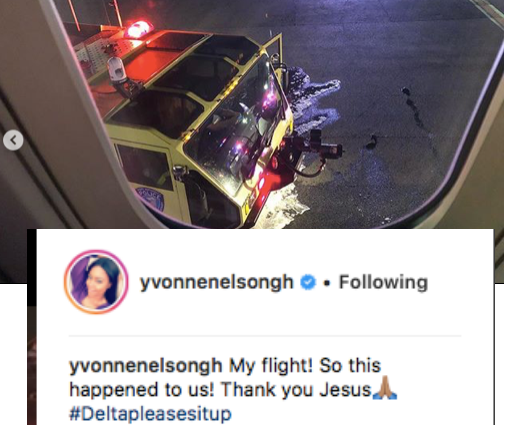 Passengers on a Delta Air Lines flight from New York to Ghana had a scare and an unexpected overnight stay in New York late Monday.

Upon landing, the brakes on the Boeing 767 overheated and the plane was met by fire and rescue officials, Gee said.  Flames can be seen in video posted on social media. The 205 passengers evacuated via stairs.

Onboard the flight was Ghanaian actress, Yvonne Nelson who shared a post on Instagram asking the Delta Airline to sit up. She wrote : “My flight! So this happened to us! Thank you Jesus🙏🏽 #Deltapleasesitup” https://youtu.be/_ZtbQ7iCTjA The airline provided hotel accommodations and meal vouchers, and travelers are expected to fly out Tuesday night. “Delta apologizes to our customers onboard Flight 420 for delaying their travel,” Gee said in a statement. “We are working to get customers to their destination as soon as possible.”]]>
Related Topics:yvonne nelson
Up Next

“No one has dethroned me yet, I’m still King Of Photoshop” – Adekunle Gold

KOFAS is not my sponsor, I work hard for my money – Actress Salma Mumin

Upgrade your smartwatch with the new HUAWEI WATCH Fit!