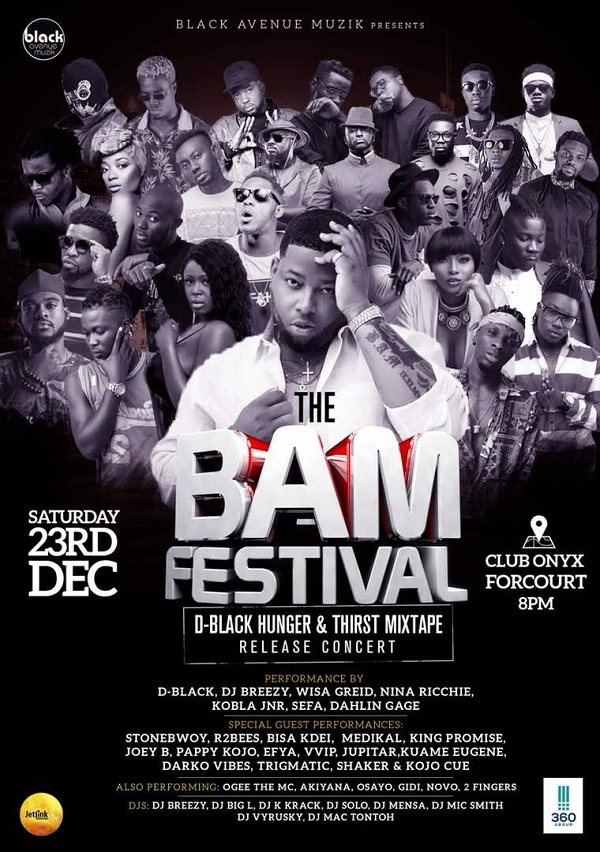 Ahead of the festive season, multiple award-winning Ghanaian rapper and CEO of Black Avenue Muzik Desmond Blackmore also known as D-Black has announced the maiden edition of the BAM Festival and the D-Black Hunger & Thirst Mixtape release concert. First of its kind, the day long BAM Festival will consist of a number of exciting activities including fun games at the poolside of Oasis Pool & Shisha Lounge from midday till the musical and mixtape launch concert kicks off at 8pm with performances from D-Black, DJ Breezy, Wisa Greid, Nina Ricchie, Kobla Jnr, Sefa Dahlin, Gage, Osayo with special guest performances from Stonebwoy, R2Bees, Bisa Kdei, Medikal, King Promise, Joey B, Pappy Kojo, Efya, VVIP, Jupitar, and several others. The day’s activities will be climaxed at Club Onyx with the Champagne Campaign Party (The Climax) The BAM Festival, Hunger and Thirst Mixtape release concert is scheduled for December 23 2017 at the forecourt of D-Black’s Club Onyx in Cantonments. Known for throwing some of the wildest parties and hosting the biggest celebrities in city, venue for the BAM Festival and Hunger & Thirst Mixtape release concert will be no different from the forecourt of the Club Onyx located in Cantonments, Accra behind the Police Headquarters and next to Rockstone’s Office. Tickets go on sale on the 15th of December 2017 at Yfm at the Accra Mall, The 4syte Mansion, Live fm and at the Oasis Pool & Shisha Lounge in Cantonments.]]>

What a time to be an African! On the back of a successful Global Citizen Festival in Accra, and a visit of  Recording Academy CEO, Harvey Mason Jr to Ghana, his first trip to West Africa, it appears that Afrobeats may soon get its individual shine at the Grammys! END_OF_DOCUMENT_TOKEN_TO_BE_REPLACED

The School of Graduate Studies of the University of Professional Studies (UPSA) has honoured Ghanaian musician, Rebecca Acheampong known popularly as Becca for her outstanding academic achievements. END_OF_DOCUMENT_TOKEN_TO_BE_REPLACED

Platinum selling artist, KiDi has reacted to the resurfacing of his old tweets on the social media platform. END_OF_DOCUMENT_TOKEN_TO_BE_REPLACED