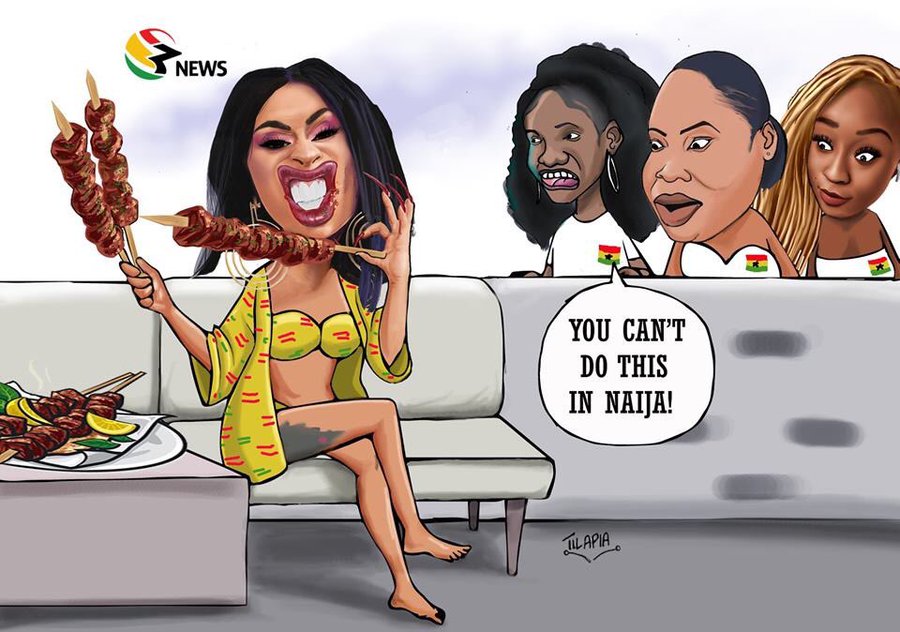 The very meaning of controversy has been contested in 2019. With so much access to celebrities, the beginnings and ends of their relationships, the snubs and fights that shook the nation. These were some of 2019’s biggest celebrity controversies that dominated the headlines and our social interactions. Get some ‘Khebab’ this is fun!

The 20th edition of the Vodafone Ghana Music Awards is one Ghanaians will never forget. It was the first time a celebrity had pulled a gun on stage and live TV. It was the first time Stonebwoy and Shatta Wale had taken their feud from social media into action and the days that followed were more controversial. Award withdrawals, indefinite bans, police arrests, private peace talks, a Peace Conference, kisses on live television, new friendships and an ongoing court trial. It is great to see both musicians ending the year on a good note.

CARDI B ‘MEAT AND GREET’

When American rapper Belcalis Marlenis Almánzar aka Cardi B who was billed to perform at the Livespot X Festival arrived in Ghana on 8th December, it was the beginning of an endless weekend of controversies. Following highlights from experience in Nigeria which saw living it up in a strip, many Ghanaians hoped she will have a better experience in Accra. However as she put in herself, her short time in Ghana was full of dilemmas.

After touching down in Accra and was welcomed by a crowd at the airport, she headed to her hotel and showed the world her awesome room at the Kempinski Gold Coast Hotel. An hour later, videos of Moesha, Becca, Afia Schwarzenegger, Hajia4real, Efia Odo,  Akuapem Poloo, among others were seen matching to the Kempinski Hotel to meet the pop star. But the situation got quite tense when Cardi B did not turn up for the event.

In their anger, some of the celebrities took to social media to express their dissatisfaction with the development and condemned the rapper for her behaviour.

But at a meet the press session after most of the celebrities had left the venue, Cardi B said the promoters of the event did not inform her about a scheduled meet and greet with celebrities, adding that it was not in her nature to disrespect others. She later went on IG live to lash out at the celebrities who had seen her by the pool but failed to come confront.

Cardi b speaks at meet and greets, says she didnt mean to disrespect Ghanaians #ameyawtv

Out of all the brouhaha surrounding Cardi B’s visit, it was actress Akuapem Poloo who had the last laugh. Akuapem Poloo waited whiles the other celebrities left and had the oppoutunities to meet and dance with her ‘role model’. The award-winning rapper later followed her on Instagram and even called her ‘my twin’ on her IG story.

Yaaaay.. @iamcardib just followed @akuapem_poloo . Plus she got mentioned on her IG story. #ameyawtv

As his then boss, Stonebwoy was trying to reconcile with his rival, Kelvynboy created a new rival in Wendy Shay. The unintentional curve from him to Wendy Shay during the Peace Conference created a month long beef between the two.

Watch: “I can write better songs for Bullet to give to Wendy Shay” – Kelvyn Boy

In September, Ghanaian musician Livingstone Etse Satekla popularly known as Stonebwoy announced the release of Kelvynboy from his record label. Stonebwoy revealed that after an audit of Kelvynboy’s conduct during his initial one-year agreement which expired on January 22, 2019, the label found no good reason to activate the 4-year extension of the agreement option.

Kelvynboy’s sack came after Stonebwoy had released Blakk Cedi from his team as a manager.

When the nominees for the 2020 GRAMMY Awards was announced it sparked a week long conversation on social media. With the nomination of Burna Boy’s AFRICAN GIANT and Beyonce’s LION KING: THE GIFT, there was confusion as to what exactly the Ghanaian acts featured on these project would be getting if the projects won their various categories. Fuse ODG ‘unnecessarily’ went hard at entertainment pundits who asked him for a clarification on the issue and this sparked another controversy.

This is what would happen if Beyonce’s ‘The Lion King: The Gift’ wins GRAMMY Best Pop Vocal Album

Nana Appian Mensah, CEO of Menzgold Gold had quite a year! But it was Bessa Simons’ revelation that the Musicians Union of Ghana MUSIGA, invested in Menzgold that had people shook. The aspiring MUSIGA president disclosed that the Union, under the Bice Osei Kuffuor administration invested Ghc70,000 in the gold dealership company before its unfortunate collapse.

2019 was a rough year for Bola Ray’s EIB Network as many of the media houses’ on-air personalities left for other jobs. From Berla Mundi, Giovanni Caleb to Kemmini Amanor, people were curious as to what was exactly happening. Whiles speaking at the iYes Summit in August, Chief Executive Officer of EIB Network, Nathaniel Kwabena Anokye Adisi revealed the reason why most of his staff left.

Bola Ray openly disclosed how he had to delay payments of salaries for 7 months in 2018 and further explained that people who worked with EIB and could not bear with the challenges that came with salary delays used different excuses to leave for other jobs.

June was hot as two names dominated the headlines, trends and social group chats. As Medikal and Strongman were fighting each other with punchlines, people were busy accessing who was a better rapper than the other. They both left punchlines and hits that will be in the minds of many. Were you #TeamMedikal or #TeamStrongman?

Earlier this month, Lynxx Entertainment signee Kidi dropped a bombshell on his fans and it shook the whole nation. The ‘SAY YOU LOVE’ hitmaker showed his son whom he had been hiding for 3 years to the world. According to Kidi, he kept Zayne a secret because he knew how judgmental Ghanaians were.

When Trigmatic revealed in an interview that Amakye Dede had a ghostwriter in the past, he never imagined Amakye Dede taking the matter to court. Although Trigmatic had issued a public apology, the highlife legend sued him 1million Ghana Cedis for defamation.

Most Ghanaians were shocked when Madam Julie Yiadom-Oti, the mother of singer Becca  granted an explosive interview claiming that Becca’s husband, Tobi, has branded her as a witch and cut her off from reaching Becca. Madam Yiadom-Oti spoke with passion and anger about her sour relationship with Dr Tobi.

The social media war between Moesha and Salma Mumin is undoubtedly the ‘social media beef’ of the year. They threw shades at each other through Instagram captions over who took insipiration from who to get plastic surgery.

There have been many breakups between Shatta and Shatta Michy but the 2019 version seems to be the final one. Throughout the year, shades and shots were thrown from both sides that convinced most people that the two were at the end on the road with their relationship.

Following her absence from social media and speculations about her being pregnant, MzVee in July denied that she had left Lynxx Entertainment. She returned in September to officially announce her departure from the Richie led record label. Mzvee and Lynx Entertainment ended their 8 years working relationship a move many saw coming.

Princess Shyngle always finds herself in the news and 2019 was definitely that year she went international with her controversies. From a G Wagon, she claimed was gifted to her by her boyfriend on Val’s Day to the engagement with her Senegalese boyfriend, Frederic Badji which was called off a month later because she accused him of cheating before reuniting with him again! The biggest Shyngle controversy however, was when she was accused of sleeping with Burna Boy and causing a breakup between him and Steflon Don.

Afia Schwarzenegger vs Tonardo and Mzbel

Since the year began, Wendy Shay has been on the lips of Ghanaians for various reasons. The “inappropriate” outfit she wore on her visit to former President John Kuffuor’s home had tongues wagging. However, it was her interview on TV Africa about her net worth that Ghanaians will never forget. Even Prince David Osei called it ‘dumb’

When rumours were rife that media personality Vanessa Gyan’s baby daddy is Stephen Appiah many were shocked. According to rumors, several close friends of Vanessa had confirmed that Ex-Blackstar captain, Stephen Appiah was her child’s father but she never commented on the issue so we will never know the truth.

Vanessa Gyan to host a free baby shower for 150 expecting mothers next month.

In just a year of her introduction into the Ghana music scene, Fantana’s name has been attached to one controversy after the other. From her cooking skills, Fantana suffered a wardrobe malfunction as she performed at the REIGN CONCERT and Ghanaians didn’t let it slide. The singer whose sanitary pad did not fit in well into her panties suffered a backlash after the video of her performance went viral. Fantana was slammed by some social media users for not wearing underpants when she knew her dress was skimpy. A few weeks after the incident, she accused her manager, Bullet and label mate Wendy Shay for constantly bullying her. An accusation Bullet and Wendy denied.

2019 was a rough for Ghanaian actor Chris Attoh! After his wife of eight months was murdered in cold blood in the US, the actor also lost hisd dad in October.

The 2019 Miss Ghana Queens were surrounded with so much controvies even the first-runner up resigned from her position.

Which celebrity controversy surprised you the most and which ones are missing on this list? Let us know!

Why Online Payday Loans can Save your Day